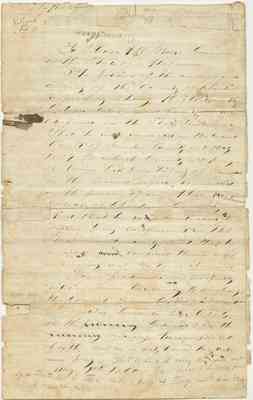 To Hon A.B. Moore Governor of the State of Alabama The petition of the undersigned citizens of the County of Choctaw Respectfully shows that Willoughby Gibson late of said county is now Confined in The State Penitentiary That he was convicted in the Circuit Court of Sumter County in May 1857 to which County a change of [venue?] had been taken of Murder in the Second Degree, committed on the person of one Alexander Wilson of Choctaw [illegible] And that he was sentenced to Fifteen Years confinement in the State Penitentiary, and that he is now illegible confined therein and is serving out the time aforesaid Your petitioner, respectfully petitions Your Excellency to Discharge the Convict from his imprisonment and restore him to his liberty, on the following grounds for the following reasons [hereafter?] set forth, and as in duty bound they will ever pray That is he is A very poor man and May 1 1860 has a large & helpless family & that he is their only help & they need him very much

Last edit 3 months ago by Maria the Elder

Last edit 3 months ago by Maria the Elder